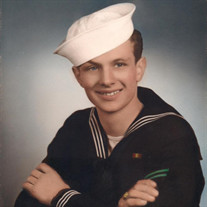 John Everett Anderson of Selmer, TN was born September 29, 1936, in Drumheller, Alberta, Canada, the son of the late Ernest Carl Anderson and Edith Valentine McNeill Anderson. He was united in marriage to Sarah Childers Harrison on January 9, 1982. He retired from the United States Navy after 30 years of service. As a veteran, John believed in serving veterans and their families. He was a Life member of the American Legion and served as Commander of Post 06 (Corinth, MS), as well as the positions of Adjutant and Chaplain. John also served as Commander of American Legion Post 162 in Selmer, TN, and was a member of 40&8, Voiture Locale 1147 of MS. Additionally, John was a Life member of Sons of Union Veterans of the Civil War, 1861-1865. He served as Department Commander (TN and AL), as well as Camp Commander for Farragut Camp 06, Savannah, TN. He served on several national committees, including Real Sons and Daughters committee, and assisted his wife to organize Daughters of Union Veterans, Tent 02, Selmer, TN. He was proud of his Scottish heritage, was a member of the Celtic Society of West Tennessee, and loved to travel. John was a Southern Baptist Evangelist and ministered in many area churches. He loved to do the Lord’s work and enjoyed gospel singing. He had his own quartet for many years and later sang with Jacinto Singers of Alcorn County, MS, with his wife Sarah. John was a member of the Eastview Baptist Church. Mr. Anderson departed this life on May 10, 2022, in Selmer, Tennessee at the age of 85 Years, 7 Months, 11 Days. He is survived by his wife, Sarah Anderson; two stepsons, William Harrison and Wallace Harrison; and his brother, Jerry Lee Anderson of AZ. This obit was composed by John Anderson. Private services held by Mr. Anderson's request.

The family of John Everett Anderson created this Life Tributes page to make it easy to share your memories.

Send flowers to the Anderson family.