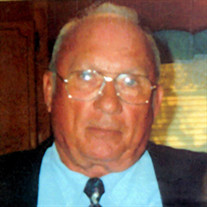 John Denzel Martin was born January 20, 1933 in Savannah, TN the son of the late Luke and Catherine Ann Martin. He was united in marriage to Patsy Ann Hunt. Mrs. Martin preceded him in death on June 15, 2001. Mr. Martin retired as a truck... View Obituary & Service Information

The family of John (Jack) D. Martin of Savannah, TN created this Life Tributes page to make it easy to share your memories.