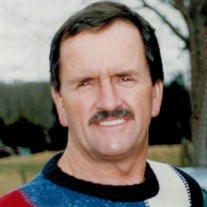 Lawrence Hill Johnson, age 78, passed away Wednesday, January 13 at his home in Henderson, TN. Lawrence was born in Henderson, TN on November 19, 1942, seventh child of the late William Everette and Margie Mae Hill Johnson. He attended Harmony School in the Harmony community and as a young man he learned to work hard on his family farm. He began his career at Brown Shoe Company in Selmer, TN. In 1972, he started his long term employment with Midwest Farms, as a route salesperson, which was later acquired by Dean Foods and then becoming Turner Dairy where he eventually retired. In 1965, he was united in marriage to Carolyn Jane Carpenter. Later in life, he had his second marriage to Marcia Ross. He was a faithful member of Sanford Hill Baptist Church. Lawrence's interests included watching NASCAR races, auto detailing, and gathering with family and friends to laugh and share stories. He was a good father, loving grandfather and great-grandfather. He was a strong, proud, and courteous man. A good friend to all, he was a man who would give his shirt for a friend. He is loved and will be missed by many. He was preceded in death by his parents; two wives, Carolyn Jane Johnson and Marcia Johnson; a granddaughter Kayla Lynn Johnson; a brother, JR Johnson; two sisters, Willie Mae Ross and Nell Vires. He is survived by his children, Gregory Johnson (Lisa) of Chapin, SC and Sonya Mewborn of Henderson, TN; grandchildren, Payton and Grayson Johnson of Chapin, SC, Tyler Mewborn and Devin Black of Henderson, TN; great-grandchildren, Rylynn and Lorelai Black of Henderson, TN; sisters, Ann Hysmith and Carolyn Henry of Henderson, TN; brother, James Johnson of Henderson, TN; beloved nieces and nephews. Funeral services will be 2:00 PM Monday, January 18, 2021 at Shackelford Funeral Directors of Henderson’s Crook Avenue Chapel with Shane Connor officiating. Burial will be in Chester County Memory Gardens. The family will receive friends at Crook Ave Chapel on Monday from 11:00 AM to 2:00 PM. The family requests that facial coverings be worn and mindfulness of social distancing be practiced.

The family of Lawrence Hill Johnson of Henderson created this Life Tributes page to make it easy to share your memories.