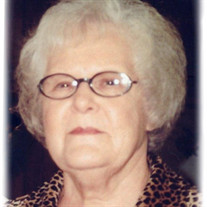 LOIS ALEXANDER was born in Jamestown, Tennessee on September 4, 1932 the daughter of the late Frank Ealis and Ora May Richards Stephens. On September 14, 1950 she was united in marriage to Elton Alexander, who survives. Lois grew up in Jamestown,... View Obituary & Service Information

The family of Lois Alexander created this Life Tributes page to make it easy to share your memories.

was born in Jamestown, Tennessee on September...

Send flowers to the Alexander family.