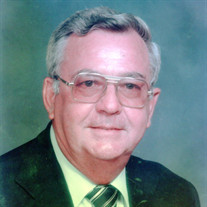 Louie Hillard Jones "Pa Louie" was born in Savannah, Tennessee on December 28, 1931, the son of David and Lois Harmon Jones. On September 11, 1948, he was united in marriage to Mildred Sue Franks. They shared 71 plus years together. Louie worked in the 1950's at the Box Factory and Brown Shoe in Savannah. He also worked at General Motors in Flint, Michigan. In the 60's Louie worked several years at D.J. Hughes store and then went into business with friend, Bruce Simpson (J.S. Men's Wear). Later he became a car salesman for Ray May Motors, Jones Motors, and Rogers Motors, all in Savannah. He retired after 27 years with the Hardin County Board of Education as a bus driver and custodian. Louie was a member of the Savannah Church of Christ. In earlier years, he served as an elder for Mt. Zion Church of Christ. He was also a member of Woodmen of the World. Louie served in the Army National Guard for 8 years. Louie loved living on his small farm in the Nixon Community. He raised cows and always had his garden, sometimes three, to make "Ma Sue" happy with canning and filling the freezer. He was also an excellent carpenter. Family members were blessed with china cabinets, desks, beds, entertainment centers, and tator and onion bins. He departed this life on Saturday, March 6, 2021, in Savannah, Tennessee at the age of 89 years, 2 months, and 6 days. Louie is survived by his children, Linda Davis and her husband Larry of Savannah, Tennessee, Maxie Jones and his wife Paula of Pickwick Dam, Tennessee, and Regina Thomas and her husband Ricky of Jackson, Tennessee; grandchildren, Lori Anne Harris (John), Chad Davis (Mandy), Chris Jones (Ginny), Amber Thomas, Clint Jones (Twylla), and Amy Hunt (Cameron); great grandchildren, Chandler Davis Harris, Delaney Addison Harris, Cooper Dawson Harris, Cortlynn Rachel Davis, Audrey Cate Davis, Jaycee Kay Jones, Alexis "Lexi" Kate Jones, Willa Kate Jones, Henry Paul Hunt, and Thomas Grady Hunt; and many nieces, nephews, and cousins. In addition to his parents and wife, he was preceded in death by three sisters, Bea Bruce, Betty Collins, and Dean Parsons; two brothers, Joe Jones and Virgil Jones. Memorial donations may be made to the Pickwick Church of Christ or the Savannah Church of Christ.

Louie Hillard Jones "Pa Louie" was born in Savannah, Tennessee on December 28, 1931, the son of David and Lois Harmon Jones. On September 11, 1948, he was united in marriage to Mildred Sue Franks. They shared 71 plus years together. Louie... View Obituary & Service Information

The family of Louie Hillard "Pa Louie" Jones created this Life Tributes page to make it easy to share your memories.