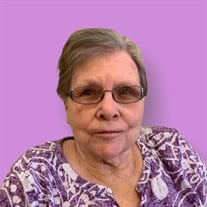 Marilyn Joyce Webster was born November 28, 1934 in Milan, MI the daughter of the late Carlton and Arlene Williams Marray. Marilyn worked for Meijer's Grocery in Grand Rapids, Michigan for many years. She was a faithful member of First Baptist... View Obituary & Service Information

The family of Marilyn Joyce Webster of Michie, TN created this Life Tributes page to make it easy to share your memories.

Send flowers to the Webster family.