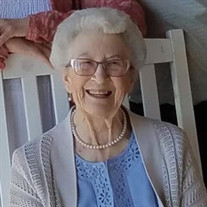 “This is MY commandment: that you love one another as I have loved you.” John 15:12 “And now these three remain: faith, hope and love. But the greatest of these is love.” 1 Corinthians 13:13 Martha Nell Wilbanks Emmons passed gently into the arms of her Savior on November 7, 2020. She was 87 years old. Born in McNairy County, Tennessee, on July 2, 1933, Martha was the youngest of six children. She told stories about picking cotton when she wasn’t as tall as the bag she was trying to fill and of going to the field with her father to plow. She played with her sister Clara, making imaginary playhouses out of leaves and sticks. She was teased by her brother Johnny, whom she adored. She idolized her older siblings, Haze, Athalee, and J.D. She graduated from Selmer High School where she played basketball and met the love of her life, Howard Ray Emmons, whom she married on Christmas Day, 1951. In her senior yearbook beside her picture reads, “A loving smile she gave to all.” This would be a true statement throughout her life. Her love of traveling was piqued when her husband began his military service in 1953. From Camp Gordon, GA, to Washington, D.C., to Paris, France, Martha and Howard were together. When she joined him in Paris, she sent him a telegram that she was coming. She flew in a plane for the first time in her life, arrived in France speaking not a word of the language, and miraculously managed to find (or be found by) her dearest love. In later years, their children would ask again and again to see their beautiful photographs and to hear stories about their adventures overseas. The memories and friendships they made during this time lasted throughout their lives. After military service was over, she worked as a bookkeeper for Sears Roebuck in Memphis, TN. Their daughter, Sharon, was born in 1957, and they welcomed their son, Howard David, in 1964. Martha left her job at Sears in 1969. Always one to stay busy, in addition to taking care of her home and children, she kept the books for a number of small businesses throughout the area. She continued her bookkeeping until they were transferred to Atlanta in 1979. In Georgia, she was a full time homemaker and mother. As grandchildren were born, Martha became known almost exclusively as Marmee, a name she treasured. In 1988, they moved once again, this time to Chicago, IL. They spent three years living in Naperville and making new friends who were amused by their southern accent and manners, but charmed by their genuine warmth and love. Retirement brought them back to Georgia in 1991, and they made their home in Grayson for the next three decades. Retirement brought opportunities for travel, both to Europe and across the U.S. in their motorhome. They could be found snow-birding in Plant City, Florida, with her brothers and sisters-in-law for many years. No matter where they went, she and Howard turned neighbors and acquaintances into lifelong friends. And no matter how far she traveled, Marmee was only a phone call away, for advice on baking biscuits, what to do for a scraped knee, or just to listen to the details of your day. Her most outstanding qualities were her boundless love and willingness to listen. She was an avid reader, a talented golfer, an expert quilter, and a lover of animals and music. She had a lovely voice and sang in the church choir for many years. Her cooking was legendary and her sweet tea a favorite among her family and friends. She had an extraordinary memory and a gift for numbers. She supported her children and grandchildren’s activities, as an audience member or cheering from the bleachers or sidelines. She was always the best audience and most loyal fan. Marmee was proud of every accomplishment and supported every passion and interest. She was a lifelong member of the United Methodist Church, from Mount Vinson and Union Grove in her childhood to many years at Underwood Methodist in Memphis, and decades as a member of Mountain Park United Methodist. She especially loved the members of the Friendship Sunday School class and longed for the day when they could once again meet face to face. She was preceded in death by her husband of almost 64 years, Howard Ray Emmons; by her parents Eddie O. and Artie Hagy Wilbanks; her brothers J.D. Wilbanks, Haze Wilbanks, Johnny Wilbanks; her sisters, Athalee Wilbanks Christopher and Clara Wilbanks Roberts. She is survived by her children and their spouses, Sharon and Ted Morrow of Stone Mountain, GA, and David and Jackie Emmons of Grayson, GA; grandchildren, Katy and Pete Stigers of Bristol, TN; Anne and Jake Cullens of Brooklyn, NY; Amy Morrow Hall and Kelly Hill Hall of Stone Mountain, GA; Maggie and Daniel Penton of Titusville, FL; Tanner Emmons, Taylor Emmons, Hunter Emmons, and Emily Emmons of Grayson, GA; greatgrandchildren, Nell Stigers and Peter James Stigers Jr, and Naomi and Bethany Penton. She is also survived by her brother-in-law and sister-in-law, Jerry Lyn (“Nick”) and Gerry Emmons of Selmer, TN, dozens of beloved nieces and nephews, and precious friends. Visitation will be at Shackelford Funeral Directors-Selmer Chapel on Friday, November 13, 2020, from 11:00 AM-1:00 PM. Graveside services will be held at 2:00 PM at Mount Vinson United Methodist Church Cemetery in Stantonville, TN. In lieu of flowers, the family requests donations be made to Mountain Park United Methodist Church, PO Box 871147, Stone Mountain, GA 30087, or to the charity of your choice.

The family of Martha Nell Emmons of Grayson, GA created this Life Tributes page to make it easy to share your memories.

“This is MY commandment: that you love one another as I have...

Send flowers to the Emmons family.