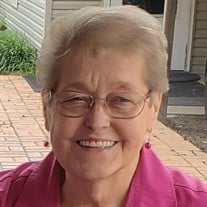 Mary Jean Harbor Brewer was born at home on Tuesday, May 13, 1947 in Ridgely, TN. After attending elementary and high school in Tiptonville, TN, she began her working life with employment as a food server at Reelfoot Lake and Samburg, TN. Jean... View Obituary & Service Information

The family of Mary Jean Brewer of Bethel Springs, TN created this Life Tributes page to make it easy to share your memories.

Mary Jean Harbor Brewer was born at home on Tuesday, May 13,...