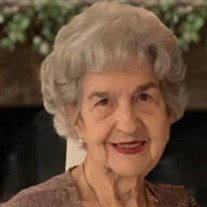 ** A private, family-only service for Mrs. Wilson will be held at the Shackelford Chapel in Bolivar with burial at Bolivar Memorial Cemetery. ** Mrs. Nelda Jean Wilson, 89, passed from this life on Sunday, January 30, 2022 at her home in Whiteville, TN. A native of Hardeman County, Mrs. Wilson was born in Grand Junction, TN and had lived in the New Castle Community for 70 years. Born February 9, 1932, she was the daughter of the late Eugene & Effie Parham Wynn. She was united in marriage on July 18, 1952 to Robert Wesley Wilson, who preceded her in death. She was a lifetime member of Grand Junction First United Methodist Church where she was the pianist for many decades, first playing at age 8, and also served on many church committees including First United Methodist Church Women and a community Bible study group. She taught piano to many students over several years. She worked as secretary and treasurer for Wilson Well Company alongside her husband for over forty-five years. Active in the Tennessee Water Well Association, she also wrote their newsletter, "The Bucket". A licensed private pilot, Mrs. Wilson was a member of the 99'ers - a professional women's aviation organization and participated in the Powder Puff Derby Air Race across America. Mr. and Mrs. Wilson opened the Dairy Hut (now known as The Hut) in Somerville in 1952. She loved to travel and ventured to places such as Israel, Alaska, Canada, Mexico, Hawaii, Australia, New Zealand, Central America, and most every state in the United States. Mrs. Wilson leaves behind three daughters, Teresa Brockwell (John) of Murfreesboro, Jenny Evans (Robert) of Collierville, and Kristi Anderson (Brad) of Jackson; one son, Rodney Wilson (Julie) of Whiteville; 12 grandchildren, Lauren Trousdale, Amy Bartlett, Julie Adams, Andrew & Alex Wilson, Callie Wolfe, Heather Stamps, Melissa Evans, Whitney, Rachel, Stephen & Ashlin Anderson; and nine great-grandchildren, Joel, Hannah, & Luke Trousdale, Hayes & Briley Adams, Brock & Laney Bartlett, Ellie & Brooks Wolfe and one "on the way". In addition to her parents and husband, she is preceded in death by a brother, Roy Wynn of Grand Junction. The family would like to acknowledge and express deep appreciation to the wonderful ladies who helped them provide loving care for Mrs. Wilson over the past year; Rachel Wilkerson, Ellen Jones, and Linda Billings. Memorials contributions in Mrs. Wilson's name may be made to Grand Junction United Methodist Church, St. Jude's Children's Research Hospital (www.stjude/donate), or Compassion Living Foundation.

** A private, family-only service for Mrs. Wilson will be held at the Shackelford Chapel in Bolivar with burial at Bolivar Memorial Cemetery. ** Mrs. Nelda Jean Wilson, 89, passed from this life on Sunday, January 30, 2022 at her home in Whiteville,... View Obituary & Service Information

The family of Nelda Jean Wilson created this Life Tributes page to make it easy to share your memories.

** A private, family-only service for Mrs. Wilson will be held...

Send flowers to the Wilson family.