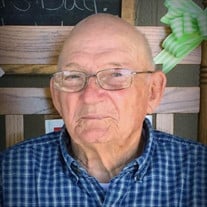 Paul Isbell, 89, of Bolivar, departed this life Saturday evening, April 2, 2022, at Christian Care Center in Bolivar. He was born in Chester County on Saturday, June 18, 1932, son of the late Paul Isbell and Tressie Campbell Isbell and lived all of his life here. He worked at Western Mental Health Institute as a psychiatric technician and later as a delivery driver for Sealtest Dairy, and retired from the County Highway Department. He married Elizabeth "Liz" Cherry in May of 1958 and she preceded him in death on May 27, 2017. Mr. Isbell served his country in the US Navy during the Korean Conflict and enjoyed traveling across the area as an avid fox hunter and judge. He was an expert leather craftsman and avid baseball/softball player, playing well into his 50's, but later enjoyed watching his granddaughters softball games and coaching little league. He could most often be found attending one of the 'Liar's Club' breakfasts at Joe's Restaurant. Mr. Isbell was Baptist in faith. Survivors include his three daughters, Dana Blackwell of Bolivar, Laurie Fawcett (Mac) of Hickory Valley and Nan Sultan (John) of Vaiden, MS; seven grandchildren, Hayden Dugger (Sandy), Laura Kate Blackwell (Tanner Parker), Laramie McKenzie (Nic), Lisa Wilhite (Henry), Thomas and Maxwell Fawcett and Paul Martin Burcham (Bethany); a grandson in law, Josh Marlar; and 8 great grandchildren, Zoie, Maverick, Alex, Layla, Paisleigh, Cale, Asher & Maci. In addition to his wife and parents, he was preceded in death by a sister, Mona Lee Gillis and a granddaughter, Bridget Marlar. Memorial contributions in his name may be sent to St. Jude Children's Research Hospital (www.stjude.org/donate).

The family of Paul Isbell created this Life Tributes page to make it easy to share your memories.

Send flowers to the Isbell family.