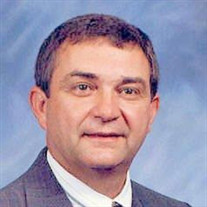 RICKY JOHNSON Henderson, TN: Ricky Darryl Johnson age 71, passed away January 15, 2022 at Jackson Madison County General Hospital. He was born May 21, 1950, the son of the late O.C. and Lucille Evans Johnson. He was united in marriage to Brenda Barham Johnson on December 31, 1971. Ricky graduated from Chester County High School and attended Jackson State and Freed-Hardeman University. He also completed a welding course and was employed by Proctor & Gamble for twenty-eight years. He worked on lines 1 and 3, and also on the maintenance crew for eleven years. He was a welder, sheet metal man and worked in millwright. He spent his last six years at Proctor & Gamble on the railroad switch crew. After leaving Proctor & Gamble, he obtained his real estate broker license, opening a successful real estate company in Henderson, TN. He was also a school bus driver for Chester County during this time. He purchased four downtown buildings in Henderson, TN which he renovated. Ricky was a successful man in owning his own trencher, backhoe, and bulldozer business. He was truly a man of many talents, building his own dump truck from frame to finish. He traveled nine weeks with a bus load of FHU students to Creekside Church of Christ in Mobile, AL working with the Church of Christ disaster relief effort, along-side of Frank Bradford, and Lester and Ruth Stewart. He earned the nickname sledge during his time there. In 2013 Ricky and his wife moved their RV to Point Mallard camp ground in Decatur, AL. in order to be near their son Jedd and his family. He immediately went to work driving a school bus for Decatur City Schools. After eight-and a half years he retired and returned to Henderson, TN. Ricky was a deacon at the Estes Church of Christ for many years and was also active in church services at Grant Street Church of Christ, later named Decatur Church of Christ. He enjoyed RV traveling, helping his fellow man, working many jobs, and in general just loving life. Most importantly he loved serving his Lord and Master. Ricky is survived by his wife, Brenda Barham Johnson, a son, Jedd Johnson and wife Bonnie; three beautiful grandchildren, Jacie, Jenna and Joanna (JoJo)Johnson; a sister, LouNell Busby, a brother, Jay Walbert Johnson (Linda); niece, Angela Moody (Jeff), nephews, Brent and Bryan Johnson and Darryn Busby. He was preceded in death by his parents O.C. and Lucille Johnson, a daughter, Traci Johnson (1994) and a brother, Wiley Johnson. Funeral services will be 1:00 PM Friday, January 28th at the Estes Church of Christ with Roy Sharp, Billy Smith, Mark Blackwelder and Doug Burleson officiating. Burial will follow at the Chester County Memory Gardens. The family will receive friends at the church building beginning at 11:00 AM Friday the 28th. Shackelford Funeral Directors of Henderson 731-989-2421

RICKY JOHNSON Henderson, TN: Ricky Darryl Johnson age 71, passed away January 15, 2022 at Jackson Madison County General Hospital. He was born May 21, 1950, the son of the late O.C. and Lucille Evans Johnson. He was united in marriage to... View Obituary & Service Information

The family of Ricky Johnson of Henderson, TN created this Life Tributes page to make it easy to share your memories.