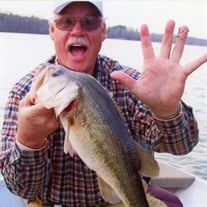 Robert Eugene "Gene" Howard departed this life July 16, 2020 at his home in Bath Springs, TN. He was born in Nashville, TN August 5, 1944, to William Samuel Jr. and Mary Elizabeth "Tootsie" Crotts Howard. Gene was a loving, devoted husband for 22 years to Janet Belton Howard. He will be sorely missed by many, many friends and family, especially his stepdaughters, Regina Janes (Greg) of Brighton, TN, Jessica Reynolds (Keith) of Jackson, TN and stepson and Gene's "Shadow", Sunnie Wayne Sweeney of Bath Springs, TN. He also leaves four grandchildren, who lovingly called him "Papa"; Bobby Janes of Millington, TN, Amy Janes of Finger, TN, Christopher Janes (Alora) of Brighton, TN, and Ryan Wayne Sweeney of Jackson, TN; and a great grandchild, Caleb Janes of Brighton, TN. He leaves his brother, William Samuel "Bill" Howard III (Ruth Ann) of Clifton, TN, and several nieces and nephews. Gene was preceded in death by his parents, W.S. and Tootsie Howard; parents-in-law, Thomas Neal Belton and Dorothy Marie Robinson Belton; brother, Donald "Don" Porter Howard; and his infant grandchild, Chance Blake Davis. Gene was a US Army veteran, who served during the Vietnam War from 1966 to 1968. He was a very hardworking affiliate real estate broker and investor for forty-five years. He was employed nine years as a salesman at Jones Motor Company in Savannah, TN and six years as a restaurant owner. As a member of the Donelson TN Sports Club for many years, he won numerous professional fishing tournaments. He loved to spend as much time as possible in his fishing boat "The Office" and was an avid hunter never missing a season, especially his yearly hunts in Nebraska. A hilarious jokester and an amazing storyteller, his stories would give you great belly laughs. As the head of his family, grace at a meal would ensue a warm feeling of gratitude and thanks no matter if it was at home or out in public. To know Gene was to love him. He never met a stranger and he would do anything for anybody who needed his help. He was kind, generous, and a good Christian man. He attended First Baptist Church of Clifton, TN. Funeral services will be at First Baptist Church in Clifton, TN on Tuesday, July 21, 2020 at 1:00 PM, then cremated as per his wishes.

The family of Robert Eugene "Gene" Howard created this Life Tributes page to make it easy to share your memories.

Send flowers to the Howard family.