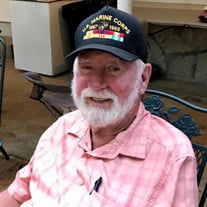 Robert W. "Bob" Jones was born on August 9, 1945 in Scranton, Pennsylvania, the son of the late Reginald W. and Genevieve T. Slawski Jones. On April 29, 1980, he was united in marriage to Janet Doris Goings, who preceded her husband in death on September 4, 2009. Mr. Jones honorably served his country in the United States Marine Corps. He served from May 1966 until May 1968 and was a Vietnam Combat Veteran. Bob obtained his Bachelors Degree in Criminal Justice from Rollins College in Winter Park, Florida. He worked as a Deputy Sheriff and Motorcycle Officer for the Orange County Sheriff's Department in Orlando, Florida prior to his retirement. He was a member of the Moose Lodge in Savannah, Tennessee, VFW in Corinth, Mississippi, and FOP in Orlando, Florida. Bob was very sociable and never met a stranger. He was affectionately known as "Mr. Bob" and "Grandpa Jones" by his grandchildren. A few activities he enjoyed included hunting, fishing, driving his Corvette, riding Harley Davidson motorcycles, and shooting guns. Robert W. "Bob" Jones departed this life on April 29, 2021 in Savannah, Tennessee at the age of 75 years, 8 months, and 20 days. He is survived by his daughters, Tammie Jones Sparks and her husband Andy of Greenfield, Indiana and Brandie Regina Jones of Savannah, Tennessee; step sons, Brian Mack and his wife Angelia of Winter Garden, Florida and Ronnie Mack and his wife Heather of Osteen, Florida; sister, Kathryn J. Watson and her husband Sterling of St. Petersburg, Florida; brother-in-law, Robert Goings; grandchildren, Sarah Richardson and her husband Aaron, Cody Sparks and his wife Lauren, Shane Sparks and his wife Amanda, Jesse Reed and his wife Kayla, and Madisson Pusateri and her husband Kevin; great grandchildren, Ayden, Claire, Scarlett, Lily, Adalynn, Sophie, Phoebe, and Quinn; and his chocolate lab that he dearly loved, Sadie.

Robert W. "Bob" Jones was born on August 9, 1945 in Scranton, Pennsylvania, the son of the late Reginald W. and Genevieve T. Slawski Jones. On April 29, 1980, he was united in marriage to Janet Doris Goings, who preceded her husband in death... View Obituary & Service Information

The family of Robert W. (Bob) Jones created this Life Tributes page to make it easy to share your memories.