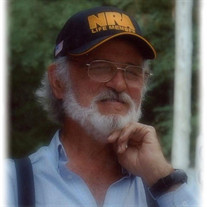 Robert "L" Taylor, Jr. was born in Savannah, Tennessee on April 23, 1927 the son of the late Robert L. Taylor, Sr. and Nora Lee White Taylor. On April 22, 1950 he was united in marriage to Mary Frances Jackson, who preceded her husband in death on September 30, 2018. Robert served his country proudly in the United States Navy. He retired for H. C. Price Company Pipeline. Robert was a member of Woodmen of the World in Morris Chapel, Tennessee and lifetime member of The NRA. He has traveled many miles through his lifetime. Robert has sailed over the equator and made many trails across the mountains. He saw the harsh beauty of Alaska and could tell you stories about all. Robert made many friends along the way. He met all with his broad grin and a welcomed hug. Robert loved and he was loved in return. His journey on this earth was long and we who knew him were blessed for it. Robert departed this life on Monday, June 7, 2021 in Savannah, Tennessee at the age of 94 years, 1 month and 15 days. He is survived by his children, Mike Russell and his wife Julia of Morris Chapel, Tennessee, Bob Taylor and his wife Pam of Adamsville, Tennessee and Regina Claburn of Morris Chapel, Tennessee; grandchildren, Jeremy Russell and his wife Kela, Josh Russell and his wife Mandy, Jenni Moffett and her husband Tony, Kirstie McCormick and her husband Terry, Chad Ward and his wife Alana, Chance Taylor and his wife Audra, Chase Claburn, and Reilly Ellis and her husband Wayne; great grandchildren, Dakota Chambers and her husband Hunter, Hannah Russell, Colton Russell, Ethan Russell, Walker Russell, Leah Grace Russell, Ike Moffett, Lucus Moffett, Elle Catherine McCormick, Samantha McCormick, Jackson McCormick, Avery McCormick, Maggie Ward, Zane Taylor, Knox Taylor, Quinn Taylor, and Bella Bodine; great great grandchild, Weston Chambers; and sister, Robbie Wolfe of Jackson, Tennessee. In addition to his parents and wife, Robert was preceded in death by one daughter, Che Chee Ward, and three brothers, Ulvey Taylor, Joe D. (Shorty) Taylor and Dalton Taylor.

Robert "L" Taylor, Jr. was born in Savannah, Tennessee on April 23, 1927 the son of the late Robert L. Taylor, Sr. and Nora Lee White Taylor. On April 22, 1950 he was united in marriage to Mary Frances Jackson, who preceded her husband in... View Obituary & Service Information

The family of Robert "L" Taylor, Jr. created this Life Tributes page to make it easy to share your memories.

was born in Savannah, Tennessee on April...

Send flowers to the Taylor, family.