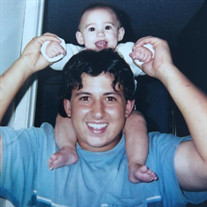 Mr. Ryan Young, age 34 of South Haven, MS passed from this life on Saturday, June 20, 2020. He was born on July 16, 1985 to Kenneth W. Young and Terry D. Scott Young Howard in Memphis, Tn. He lived most of his life in South Haven, MS but a short time in Nashville Tn. Mr. Young was a surveyor, working for himself and for his Dad for a short time. He loved his family, loved to fish and being outside doing anything. Also he enjoyed playing his guitar. He was Baptist in belief. He is survived by a daughter, Emma Grace Young of Hawthorne, Fla., his father, Kenneth Young and his long time companion Andrea Massey of South Haven, Ms., mother, Mrs. Terry Howard and husband Pat, of Holly Springs, Ms., brother, Clayton Young of Memphis, and a half sister Rachel Howard of Holly Springs, Ms. He also leaves to cherish his memory several neices and nephews, aunts and uncles. In addition, Ryan was preceded in death by his grandparents, Thomas and Betty Young and Bryon and Ruth Scott; and uncles Dale Scott, and Frank Luhn.

The family of Ryan Young created this Life Tributes page to make it easy to share your memories.