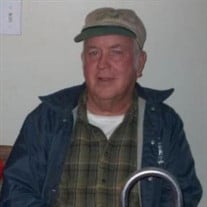 At the request of the family, masks are required and social distancing is encouraged. Stanley Noah Benson was born in Hardin County, Tennessee on September 15, 1946, the son of Archie Daniel and Lue Austin Benson. In all of his 74 years he never strayed very far, working as a machine operator for Parris Manufacturing while remaining a confirmed bachelor and favorite uncle to his 35 nieces and nephews and his multitude of great-nieces and great-nephews. He earned that title by basically being a kid himself. He was well-known and well-loved throughout the communities of Burnt Church and Walnut Grove with a reputation as a big prankster who was always pulling practical jokes on everyone. All of his family members were acquainted with the rubber rattlesnake and his fake mice. And he always wanted to hide the prize egg at every Easter egg hunt, normally in the most unusual places he could find . . . like in the pasture that the cattle occupied. Stanley loved all animals, especially his pet raccoon and ferret, and Patsy the squirrel. Then there were his two Chihuahuas, Stanley (who was already named when he adopted him) and a female dog that he never called anything other than Dog. To Stanley, every animal was his pet. Fast cars were another pleasure in which he indulged, one of his fastest being a 1967 GTO. But the make and model really didn’t matter. He could make an old pick-up fly if that was the vehicle he was in. Other productive hobbies of Stanley’s included gardening, a pastime that produced a wide variety of vegetables, and yard work in general. As long as he could possibly manage it, his lawn was perfectly done. Despite being occupied with pets and pranks, and gardens and yard work, Stanley always made time for his friends, especially his very good friend Joe Kelley. Stanley sat on his front porch every day, waving at anyone who passed, encouraging them to stop for a visit, and Joe was the one who never failed to come by. Those friends were second only to his very large family that always came together to celebrate holidays and special birthdays. Stanley Noah Benson left this world on Tuesday, August 31, 2021 at the age of 74 years, 11 months, and 16 days—half a month shy of reaching 75. He leaves his siblings Reba Moore of Savannah, Tennessee, Jeannie Mitchell and her husband Robert Joe also of Savannah, Tennessee, Gladys Winslow and her husband David of Jackson, Tennessee, and Tommy White and his wife Melanie, also of Jackson, Tennessee. As mentioned earlier, Stanley is also survived by his 35 nieces and nephews and a multitude of great-nieces and great-nephews. Other than his parents, Stanley was preceded in death by his brothers Willard Benson, Clinton Benson, Calvin Benson, and Jerry Benson, and his sisters Bessie Smith, Rubye Stark, Peggy Edwards, and Dessie Taylor.

At the request of the family, masks are required and social distancing is encouraged. Stanley Noah Benson was born in Hardin County, Tennessee on September 15, 1946, the son of Archie Daniel and Lue Austin Benson. In all of his 74 years he... View Obituary & Service Information

The family of Stanley Noah Benson created this Life Tributes page to make it easy to share your memories.

At the request of the family, masks are required and social distancing...

Send flowers to the Benson family.