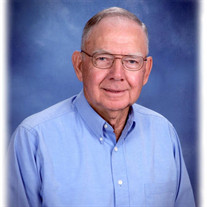 James Travis Young departed this life on July 26, 2021 at the age of 83 years, 2 months and 7 days. He was born in Savannah, Tennessee on May 19, 1938, the youngest child of the late James Oliver and Blanche Reed Young. On September 4, 1957, he was united in marriage to Doris Ann Willoughby, who preceded him in death on February 10, 2013 after 55 years of marriage. Travis primarily was a farmer having raised both hogs and cattle, corn and soybeans. He had also worked as a foreman in bridge construction, as a buyer of railroad ties for Gross & Janes Tie Company and as a school bus driver for Hardin County schools. Travis served on the boards of both of the Hardin Farmers Cooperative and the Farm Bureau Association. He was an active member of Mt. Herman Baptist Church for 50 plus years and especially enjoyed serving on the Wednesday night kitchen crew. His favorite pastime was spending time with family and friends, especially his two granddaughters and his great-grandchildren. Travis spent his last few years as a resident at Park Rest Health Center where he continued to enjoy making people smile and brightening their day. He is survived by his sons, Greg Young and his wife Retha of Savannah, Tennessee and Tommy Young of Lexington, Tennessee; grandchildren, Abby Alexander and her husband Josh and Cassie Benson and her husband Brock; great grandchildren, Brody Alexander, Kandler Benson, Sadie Alexander, Garner Benson, and Tucker Benson, all of Savannah, Tennessee; and his sister, Mary Gilliam and her husband Garland of Savannah, Tennessee. Travis was also preceded in death by his brother, R. V. Young, and sisters, Irene (Kermit) Spivey, Carrie Mae (Frank) Fondren, and Jean (James "Sonny") Fondren. Memorial donations may be made to Mt. Hermon Baptist Church, 1845 Mt. Herman Rd., Savannah, TN 38372 or Savannah Christian Academy, 3514 Cravens Road, Savannah, TN 38372, where all of his great-grandchildren attend school.

The family of Travis Young created this Life Tributes page to make it easy to share your memories.