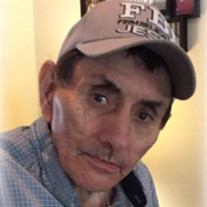 Wayne Wilbanks was born February 16, 1949 in Selmer, TN the son of Eloise Hopkins McDaniel and the late Jessie Lee Wilbanks. He was united in marriage to Joan King on July 3, 1980. Mr. Wilbanks loved going to the flea market and trading.... View Obituary & Service Information

The family of Wayne Wilbanks of Pocahontas, Tennessee created this Life Tributes page to make it easy to share your memories.