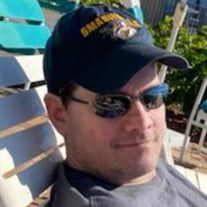 William Jeffery Freeman (Jeff), 53, passed away from this life on Monday, May 2, 2022 at UAB Hospital in Birmingham, AL. Jeff was born on December 27, 1968 in Selmer, TN and grew up in Adamsville, TN. Jeff graduated from Adamsville High School and attended Belmont University in Nashville and MTSU in Murfreesboro. While in college, Jeff served as a youth minister for Una Baptist Church in Nashville, TN where he was a member. After college Jeff became an exceptional sales rep and traveled representing G.S.I. of Pickwick Dam, TN and Clark Container of Lyles, TN. Jeff was a very passionate person and many things brought joy to his life. He was a life-long fan of everything sports. He enjoyed Atlanta Braves, Nashville Predators, Tennessee Titans, but most of all - anything and everything Alabama Sports. Alabama Football was his favorite pastime but, his most important passion was his Christian Faith. Jeff also enjoyed music, movies and traveling. He was fun loving and cherished time with family, friends, and even people he didn’t know. To know Jeff was to love him. He was the life of the party anywhere he traveled. Jeff had the most generous, compassionate and selfless spirit. He always made sacrifices for the people he loved. Survivors include his beloved companion Leslie Thrasher of Adamsville, TN., his best friend Jeff Lipford of Lawton, TN, his parents Jimmy Joe and Linda Faye Freeman of Vincent, AL, two brothers Joey Freeman and wife Cheryl of Winston Salem, NC and John Freeman and wife Wendy of Fargo, North Dakota. He is also survived by several nieces and a nephew from North Carolina and North Dakota. A private graveside service will be held at the Adamsville Cemetery. In lieu of flowers or gifts please make a donation in memory of Jeff Freeman to Adamsville First Baptist Church Building Fund.

William Jeffery Freeman (Jeff), 53, passed away from this life on Monday, May 2, 2022 at UAB Hospital in Birmingham, AL. Jeff was born on December 27, 1968 in Selmer, TN and grew up in Adamsville, TN. Jeff graduated from Adamsville High... View Obituary & Service Information

The family of William Jeffery (Jeff) Freeman of Adamsville, TN. created this Life Tributes page to make it easy to share your memories.

William Jeffery Freeman (Jeff), 53, passed away from this life...

Send flowers to the Freeman family.