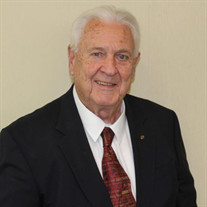 William Larry Hughes was born March 26,1942 in Hernando, MS. The son of the late Benjamin Franklin and Annie Evelyn Brown Hughes. He was united in marriage to Judy Isom on April 9, 1966. Mr. Hughes worked for over 33 years for BellSouth. At his retirement, he worked as a cable repairman. He previously served as an Elder at Middleton Church of Christ and was currently serving as an Elder at Antioch Church of Christ in Ramer. Over the years, he was involved in the Senior programs and taught Sunday school. He loved the Lord and being involved within his church. After retiring, he along with his wife enjoyed traveling. They had visited every state except for Hawaii and Alaska in their motor home. For five years, they lived on the road enjoying the beauty and uniqueness of each place they visited. Mr. Hughes often said, "if it gets too cold for shorts-it was time to leave" or "when the leaves started to fall-it was time to pull up the jacks." When at home, he enjoyed cooking for his family. They especially loved his smoked meats, famous bbq and shrimp boils. He always loved spending time with his grandchildren and taking them on camping trips. He also enjoyed going fishing and playing golf. Mr. Hughes served his country honorably in the United States Navy during the Vietnam War from 1960-1964. He loved God, country and family. Mr. Hughes departed this life on November 12, 2021 in Tupelo, Mississippi at the age of 79 Years, 7 Months, 17 Days. He is survived by his wife of 55 years, Judy Hughes of Selmer, TN; a daughter, Donna Snow and husband Thomas of Madison, TN; a son, Keith Hughes and wife Kerri of Selmer, TN; three sisters, Bettye Jo Harrell, Janice Ross and husband Ronald, Suzanne Prewett and husband Bruce; six grandchildren, Matthew Snow and wife Yanelys, Andrew Snow and wife Jasmine, Emily Snow, Philip Snow, Hannah Hughes, Tyler Hughes; two great grandchildren, Isabella Snow, William Snow, and a host of extended family and friends. In addition to his parents, Mr. Hughes was preceded in death by two brothers, Donald Hughes and Gary Hughes and a sister, Carole Seals.

William Larry Hughes was born March 26,1942 in Hernando, MS. The son of the late Benjamin Franklin and Annie Evelyn Brown Hughes. He was united in marriage to Judy Isom on April 9, 1966. Mr. Hughes worked for over 33 years for BellSouth. At... View Obituary & Service Information

The family of William Larry Hughes of Selmer, Tennessee created this Life Tributes page to make it easy to share your memories.

Send flowers to the Hughes family.